Training objectives of this project were;

Activities taken under this Training Project

116 people were trained on three key aspects of project management, from eight districts (including Quetta) in the period 5th Feb to 26th June. The consolidated attendance of each participant in the PMT and DT series is presented as Appendix 01. Participants for PMT-1 and 2 were mainly from Quetta. The participants for the DT Series were from the districts of Kharan, Killa Saifullah, Kohlu, Noshki, Panjgoor, Sibbi and Zhob (see map in Visual 01). Overall 19% of the trainees were women and 81% were men. A higher ratio of women were present in the PMT Series as compared to the women in the DT Series, who were mainly the BCC Officers from the districts (see Visual 02). 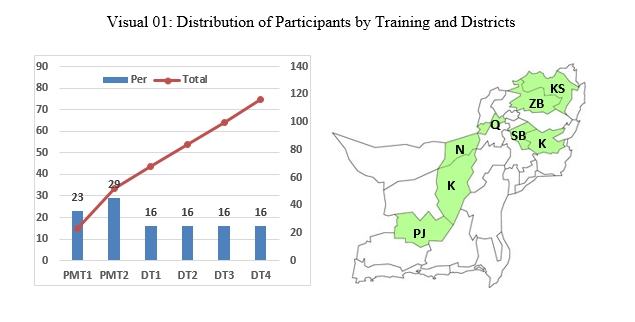 Each event, regardless of duration, was structured to (a) first focus on the three main topics of PM found to be most in-demand (see TNA) and to introduce PM concepts listed in see Visual 05), and (b) then conduct group work, group presentations and discussions on the three main topics (see Visual 03). Each group was asked to consider prevailing situations, challenges within their own working sphere of operations. A total of 24 presentations, discussions and activities were held and 14 group work sessions were conducted. Appropriate number of brain teasers and energizers were used to keep the interactive nature sustained.

PMU has been enabled with the sharing of the (a) TNA Master Dataset handed over on 26th Feb. It has been further empowered with the sharing of the (b) TRNG Master Dataset which is populated with participant attendance and feedback data. All training content, data, group outputs and consolidations are uploaded to a Google drive, the link to which is shared with PMU and the Third Party Evaluators.